When I graduated from the Sivananda Yoga Teacher Training I was given the opportunity to choose a mantra and receive a mantra initiation. I also chose to be given a spiritual name which would be based on the chosen mantra. I spent several days deciding what to do. Mantras are very powerful energy encased in a sound structure, and are directed towards a specific deity.

I did not choose the name for myself, only the mantra. The name was given to me by one of the main spiritual leaders of Sivananda Vedanta and Yoga Centers, Swami Swaroopananda.

There are many names for the Goddess Durga. I expected to be given one of these other, "lesser" names, not the name Durga. Think of it as a ladder, with the name of Durga being at the top rung, while many other names (Ambika, Lalita, Gauri etc) exist on the lower rungs, still representing the Goddess.

The way I understand this occurrence of my spiritual name is this: I need the support. So I got the maha (great) Goddess herself to help me focus my mind and my life. So far it is working very well--when I spend time with the mantra and ask for the help I need.

Here is an excerpt from a link to an article that describes Durga:


Goddess Durga is the mother of the universe and believed to be the power behind the work of creation, preservation, and destruction of the world. Since time immemorial she has been worshipped as the supreme power of the Supreme Being and has been mentioned in many scriptures - Yajur Veda, Vajasaneyi Samhita and Taittareya Brahman. The Meaning of "Durga"
The word "Durga" in Sanskrit means a fort, or a place which is difficult to overrun. Another meaning of "Durga" is "Durgatinashini," which literally translates into "the one who eliminates sufferings." Thus, Hindus believe that goddess Durga protects her devotees from the evils of the world and at the same time removes their miseries.


Elimination of suffering is a very good thing I think. Om shanti 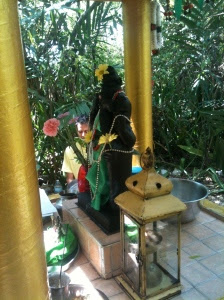