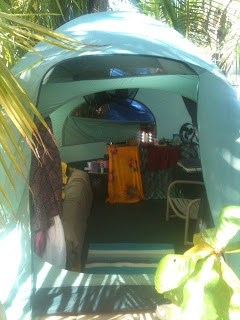 
I am now officially a tent dweller. Think nomads in one of those movies in Mongolia or another desert, only see the Caribbean. The Caribbean as inhabited mainly by yogis. Check back later for the blog in "What makes a yogi a yogi?"

The tent I bought is excellent--as is the tent real estate that I was able to procure. 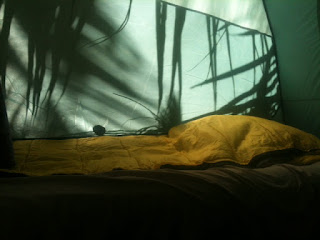 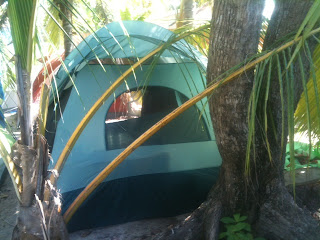 A Night in early February


I am listening to the sound of the waves rolling into the shore and the wind rustling the leaves in the large palm trees that surround my tent. The wind in leaves sounds like rain. I have not had my first "rain storm while sleeping in a tent" experience.
Something else to look forward to …

Or not! Been raining a lot. Cold, damp tent living is not fun. The fly under the tent had to be removed as it was collecting water which was seeping inside on the floor of the tent. Adapt. Adjust. Accept

Had a conflict with a woman in the office who has just returned to her Karma Yoga position. I started working in the Boutique office while she was away so we had not met. At first we got along. Then we didn't. Then there was a minor eruption. Then she did not want to discuss the issue she had raised. So I backed up. I offered to transfer to another job. Or speak to the woman who manages us.

I found it interesting that this woman said she needed space. On several occasion when I mentioned an action I had taken here, she commented on the the way the Swami would react. In what I have noticed there is not any set response for actions. It all depends on context.

The office is a very small space. Way too small for four Pitta dominant women to be working! I did not speak to the "boss". She actually gave me jobs to do in the Boutique and in the craft shed, which kept me out of the office--and out of the line of firing darts from the returning woman. I confided much to much to her. Another lesson. I too quickly confide with others whom I have just met. Discretion is a virtue.

Insight: I need to make sure that I am giving myself enough space. Sometimes that means asking for it. We cannot give freely to others what we do not give to ourselves. If I am giving myself enough space then possibly my energy which I know is very strong and often very large, may have enough room so that I am aware of others and their needs in a new way.

Insight: men are needed to keep the women around from pick pick pickin on each other. There is a chicken that lives here called "Crazy Chicken". H/she seems to be always in complaint about something. Actually I think it is a rooster. You figure out how that connects to my story!

Been in my tent for two days, doente com grippe as they say in Brasil. Began as irritation, then frontal sinus pain then bloody mucous (sorry, yogis are very interested and graphic in the comings and goings of all things with the body). Next the intestinal stuff began--it's like a full out evacuation! Low back pain. Told the head Swami since it is required of Karma Yogis to go to both morning and evening satsang and I had missed both last night and this morning. Attendance is taken!  He wants me to see the staff doctor. I spoke with him by phone and we will meet tonight to discuss my doente com grippe.

These symptoms are not uncommon for me: sinus and intestinal distress concurrently. Why now, in this beautiful place with healthy food, clean water and great air? Anger is my guess. Anger that I have become aware of and begun to release and transform into compassion. This stuff goes way, way back, in this life, before this life I believe.