Experiences that led me to live in the Bahamas

The decision to live in the Bahamas was one I began considering after my first visit there in May 2011. I was not at all sure it would work out, yet I kept dreaming of a beach front home all the while.

The story begins with making lifestyle changes through a regular yoga practice for several years. Though my quality of life had been noticably improving since beginning a regular yoga practice in the spring of 2008,  I was still not as happy as I knew I could be. So in search of something more, between 2008 and 2011, I kept leaving my beautiful Brooklyn home (and my sweet feline Bebe)

for ocean places to explore yoga more in depth in a variety of different cultures. I visited a yoga retreat center called Present Moment on the pacific coast of Mexico; took a yoga training course on one coast of Costa Rica and finished the trip with more yoga on another coast; went on a yoga and salsa women's retreat exploring Puerto Rico's beaches and rivers,

and took two trips to coastal locations in Brazil to experience the spiritual traditions and culture of the people.

From the influence of my yoga teacher in Brooklyn, I connected with the female Orixas Yemonja and Oxun, deities of the West African religion of Yoruba, and felt guided by a strong urge to reconnect with the sea and visit the lakes and rivers.

Experience of One--Non-dual/Advaita
While I was on my first trip to Rio de Janeiro I continued my daily asana practice (the postures of yoga are called asana and are just one aspect of a yoga practice). Every morning enticed by the breeze off the lake I would begin to practice. I started having very deep, meditative experience at the end of each session. While I lay on the floor on my back, legs and arms stretched out away from my body, the breeze across my body guided me to create a yoga nidra meditation. Scanning up and down my body, I consciously tuned into the opposing sensations of light and heavy, touching the ground and not touching the ground. After being absorbed in the duality of these opposites, I started to let go of the distinctions allowing dark and light to merge into one and the same sensation. This left me in a deeply relaxed state of no body, no thing and no time. Pure bliss.

In August of 2009 I took a yoga teacher training in a jungle in Costa Rica. After learning more about yoga lifestyle, I became very interested in Buddhism. My google quests to learn more about the many types of Buddhism led me to my meditation teacher, Adyashanti. My Brazilian hostess, unbeknownst to me, had already made the introduction to Adya from a music tape she had made for me that I had been listening to for over a year and half. The first song was a remix of "Let the Sunshine In" and from there the music went from Hindu and Jewish songs to Brazilian popular music eventually ending with the voice of a man speaking in English whose sentences made no sense to me whatsoever. When my search on Buddhism landed me on Adya's web site, I clicked on an audio link and there was the voice I had been hearing.

In January 2010 I spent a weekend of silence  in California with my teacher, Adyashanti. After that weekent I came home to create a daily practice of sitting meditation. After six months, though it was wonderful when I was sitting in silence, I could not seem to rise above the negative thinking. I had hit a wall. It seemed time to get serious about embarking on a new lifestyle with what felt like drastic measures. In May 2010 I decided to stop drinking alcohol.

After this major decision a couple of events occurred. In July of 2010 I was laid off from my full time job as the music teaching artist for Lincoln Center for the Performing Arts. A month later I had a second major surgery (the first surgery was in 2007 and had prompted my reconnection to yoga and taking care of my physical body). Here are three significant actions I took after these events occurred:

1. Being grateful and reviewing my accomplishments--
I knew that the teaching artist job was not my permanent path. I learned many things from having the opportunity to serve in this way though. I taught students ages pre-K to post graduate and trained educators from all over the world. I used to say I got paid to listen to music--not in order to critique, but in order to understand and make connections. That was the work of LCI as set forth by Maxine Greene, philosopher-in-residence and founder of LCI.

2. Built a large actively supportive network of people--
I found my support and reconnection to the humanity of people in 12 step groups. I highly recommend them for a safe and supportive environment for a new self to emerge.Through allowing myself to connect with the people in 12 step programs, I was then able to begin to connect with the people who were already in my life on a more authentic level.

3. Became willing to be guided by what is happening in my life--
I made lemonade out of lemons by stepping out beyond the obvious or first response. I read between the lines. When I was laid off from Lincoln Center I saw the job loss as an opportunity to retool my approach and redirect my life. When I had a second surgery I saw it as an opportunity to slow down and just be for a while as I underwent major life changes.

Slowing down the tempo of my life was definitely a key aspect to finding my way to the Bahamas. I slowed down to  "island time" long before I arrived in the Bahamas.
Posted by Teresa Durga at Tuesday, January 31, 2012 1 comment: 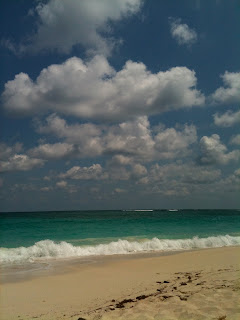 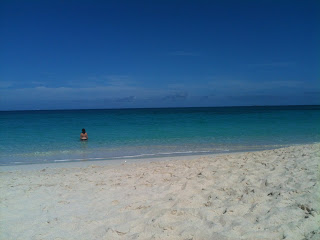 Though I checked in five days ago for Yoga Vacation I only arrived today. Checking in is an interesting travel phrase. Checking in is not arriving fully. It's just checking in-- a precursory event, a pick up note before the first down beat, not the whole song  or even a verse.

What brought me to my subsequent arrival?  Back to back days of 6 AM meditation and satsang followed by 8 AM yoga on the beach platform.

I am now in heaven. AKA Paradise Island at the Sivananda Ashram Yoga Retreat. For me, at least, deeply connecting into my corporeal form is the way I arrive. Yoga asana is my path to have such an experience.

The experience of arrival includes a sense of coming together with something, in this case my self. Then follows a sense of unity, not only within myself but with all that I perceive around me.

This is Yoga. And for me, this Yoga leads to Bliss.

Today, my fourth contiguous day of morning satsang and yoga asana brought a stillness, a deeper level of unity, peace and relaxation. During Savansana at the end of yoga asana class with Radna (a long time Sivananda practicioner, teacher and devotee, who at 80 years old still rises with complete grace into and out of a head stand, or salamba sirsasana, the King of yoga postures) I entered into bliss. My brain waves must have been hovering somewhere between Alpha and Theta state. When I arose from Corpse pose (as it is lovingly called in English) I continued to feel this deep relaxation in my morning routine of hygiene. As I emerged into the full bahamian sun, surrounded by many others who were in line to get brunch, I felt like I was floating. Or flying. Or just being. In bliss.

Soon I begin my Karma Yoga commitment. Check back again for more …